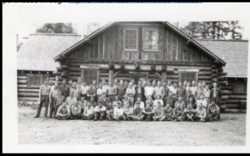 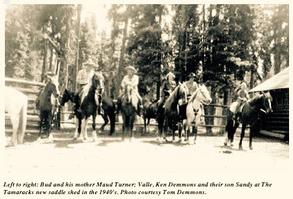 THE HISTORY OF SMOKE JUMPING

We hope you enjoy these stories about our area. We will change them regularly, so be sure and stop back. If you have a request for a story, or a story you want to share, please contact us at slhistory@blackfoot.net. 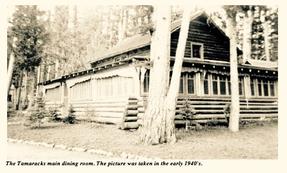 ​THE FIRST GUNSMITH IN MONTANA 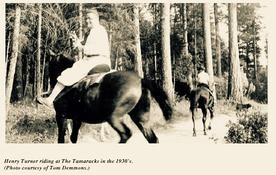 "THE TAMARACKS"  by Pelham Turner

In 1929, Henry Turner, my dad, had a dream. Two years earlier he had purchased a summer horne on the northeast shore of Seeley Lake, and it so happened that now three out of four of the adjacent properties were for sale. If he could acquire the fourth, he would have nearly one-half mile of lakeshore and the nucleus for a great lake resort. Because of a heart condition he was unable to buy life insurance, so his real purpose was to provide security for his family. In 1941, The Tamaracks did just that, as he died at the age of 54.

The land is situated in a large stand of larch, so the resort was aptly named "The Tamaracks." By the time the place was completed, Dad ended up with six summer homes on the lake, 10 additional cabins, a lodge building, saddle shed, ice house, shop, and a horse pasture of several additional acres. All of this land was under the jurisdiction of the U.S. Forest Service. originally there was a 99-year lease, but this was changed later to a "Special Use Permit."

He moved his family lock, stock and barrel to Seeley Lake and construction began on the cabins in the winter of 1929 and '30. Because of the Depression unemployment was high, so working for "Heine" Turner was considered a privilege. The wages were a dollar a day, board and room, and "tobaccy." The "Bull Durham" was "a bonus!

Construction of the new cabins meant work for many months for eight to 10 men in the area. They were housed in one of the summer homes already on the property. The cabins were a variety of sizes and could accommodate from two to eight people. One of the summer homes was converted into a dining room, and the upstairs, a dormitory for the girls who were hired as seasonal help. Most of the furniture was hand made by my brother-in-law, Ken Demmons, from jack-pine found in the surrounding forest. Hudson Bay woolen blankets on the beds and Navajo rugs on floors were the decor of the cabins. Meals were served on the dining porch overlooking the lake. Each cabin was given the name of one of the men who had worked on it, such as Dave, Dick, and Duke! A T-shaped dock was built, boats and canoes purchased, and in 1930 "The Tamaracks" was opened for business.

The Northern Pacific Railroad offered to print the brochures free of charge if their logo could be used. A lot of advertising was received this way as the pamphlets were distributed in all the depots in the East as well as on the trains themselves. As a result, 90% of the guests arrived on the N.P., even though the Milwaukee Railroad came through Missoula also.

The craze of the "Dude Ranch" was in style at this time, so Dad purchased about twenty gentle horses and joined the trend. Now he had a dude ranch on a lake which very few of his competitors could boast! Each spring Mom and Dad would go East on a "dude wrangling" trip, spending time in St. Louis, Chicago, Washington, Boston, New York, etc. enticing people to spend their vacations at The Tamaracks. Hopefully they would return with the place pretty well booked for the summer. As time went on, many guests returned for a second or third time.

Saturday night was "dance night" and everyone turned out for the event. One could always distinguish the dudes from the locals because the dudes had the new boots! Otter's Resort, about one-half mile south, had a beautiful round dance hall built of tamarack logs and a good smooth dance floor. This building was later moved to the county road and is now the Elk Horn Restaurant. Otter's Resort became Wapiti Lodge. Another popular spot was Freshour's Bar, where "town" is now. Their dance hall was not attached to the bar so even the "young'uns" could enjoy the circle two-steps, schottisches, and Virginia Reel. Music was supplied by the "Skillicorns" (a family in which everyone played an instrument), and from time to time others, including myself, would sit in to play the fiddle or guitar.

Since The Tamaracks was a family operation we all had our areas of responsibility. Ken, being a "jack-of-all-trades," was head of all maintenance. I was in charge of the horse end along with brother Bud. Sister Valle and Morn took care of the dining room and cabins. Valle did all the correspondence and bookkeeping. Ken, who was also an expert with rod and gun, became the licensed guide. Needless to say, all responsibilities overlapped and we shared the major projects such as putting up the wood, and cutting and storing the ice from the lake in February. Electricity would corne to Seeley many years later. A complete water system had been installed and water was drawn from the cove just to the north and pumped (with a gas engine) to a holding tank on the hill above the main road.

Gravity took care of the rest. This cove now provides the water for the town of Seeley Lake. The Tamaracks had the only hot and cold running water for years, and many folks stopped in just to have a hot .,tubby!

Before "Heine" passed away he realized that the "season" was too short and additional income must be generated. He invested in equipment and bought additional stock for pack trips into the South Fork of the Flathead River. Many of our out-of-state guests learned of the splendors of this area which is now known as the Bob Marshall Wilderness.

He also considered the winter sport possibilities, but other •than skating, ski~ouring (being pulled by a horse), and a bit of downhill skiing, sports in the winter, as we know them today, were nonexistent. Snowmobiles had not yet been invented and it wasn't even legal to fish through the ice. . although many of us slipped a line into the water after dark!

At that time, the Double Arrow Ranch about five miles south, the Gordon Ranch north on the Holland Lake Road, and the Circle W Ranch in the Ovando area were also catering to guests/dudes from the East. One of the highlights of the year was the "Range Ride." The guests would all gather at one of the ranches and then ride on to the others, staying overnight at each and enjoying planned activities such as miniature rodeos, races and other equestrian games.

Our big drawing card was water sports since ours was the only place with a lake.

"Swimming the horses" was a big event! Rowboat races, canoe sports, swimming and diving contests were all part of the schedule.

The Helmville Rodeo, held every year on Labor Day, was the grand finale of the dude season. The competition between the respective dude ranches was fierce, especially in the Relay and Pony Express races!! Many hours of practice by the participants went into preparing for these events and many wagers were won or lost on the outcome. A farewell dance followed the rodeo and everyone said their good-byes until next year.

During WWII the "pickings" were pretty slim. Brother Bud became a Marine Corps fighter pilot and was in the thick of the South Pacific Theater.

I was seven years younger so missed out on the "action," though I did spend three years in the Marines.

This left Ken and Valle (who had four children by then), and Maude/Morn to run the place. There was a military detachment in Missoula who spent their personal R&R on weekends at The Tamaracks--and that basically kept the place going. in 1946 I returned, but Bud (a Captain by then) decided to make a career of the military.

In the fall of that year the cabin that Mom and I shared burned to the ground. Ken Demmons and I set right out to rebuild ~ it, but the Forest Service had~plan for it in a different location, so it was never replaced.

After the war; people's vacation habits changed. The autos and roads were so much improved that people did not rely on the trains as the main transportation, and their length of stay became shorter. My wife, Joyce, came out from Minneapolis in 1948 and we were married that same year. In 1949 we sold the last of the horses and as the glory of the dude ranch seemed to have faded, The Tamaracks reverted to its original usage--a beautiful, quiet lake resort.

MYSTERY OF THE LARCH BALL